Oxalic acid is becoming more and more widely used as a treatment for varroa mites. Many people wonder about oxalic acid and honey supers. What are the impacts on honey, and how do we keep things safe? Read on to find out the tricks.

What Is Oxalic Acid?

Oxalic acid is an organic acid that is naturally found in many places in nature. It gives a tart acidic taste to the stems of wood sorel plants (Oxalis species). It is toxic in higher doses and can cause skin irritation. It forms quite spiky crystals when it reacts with certain other chemicals such as calcium and these can also cause damage to tissues.

In short, Oxalic acid is “natural” but that does not mean it is nice. If you vaporize it and inhale it, it will kill you. There is a common misconception that “natural” is safe. Snake bites are natural. They are not safe. Neither is oxalic acid – we need to understand how to work with it safely.

The control of varroa mites is important in areas where the bees are of European honeybee lineages. These bees have varying degrees of susceptibility to varroa mite and it is important to monitor and control this mite.

Varroa mites employ a sneaky life strategy where the mites sneak into the brood just before it is capped. Here, the defenseless bee is planning to peacefully undergo its pupation into an adult bee. The varroa mite however bites holes in it and sucks its hemolymph. The bee is now heavily parasitized and will not emerge in a healthy state. The mites on the other hand multiply rapidly in the brood cell and emerge to go out and parasitize more brood. The growth follows an explosive trajectory, and, if it is not controlled in some way, will cause the beehive to fail. Learn more about: When Should I Treat My Bees For Mites?

Oxalic acid is one such method of control. It kills mites that are in their phoretic stage – this is the stage when mites are outside the brood and hitchhiking around the hive on the backs of bees. What this means is that the best time to use oxalic acid as a treatment is when there is very little brood! If you do have to use it when there is more brood, then you have to use it multiple times, and the risk to the hive, and also to your honey does increase.

In this method, we use a vaporizer to introduce oxalic acid fumes into the hive. For dosing large numbers of hives this appears to be the more effective method. Here is an example of a simple oxalic acid vaporizer. 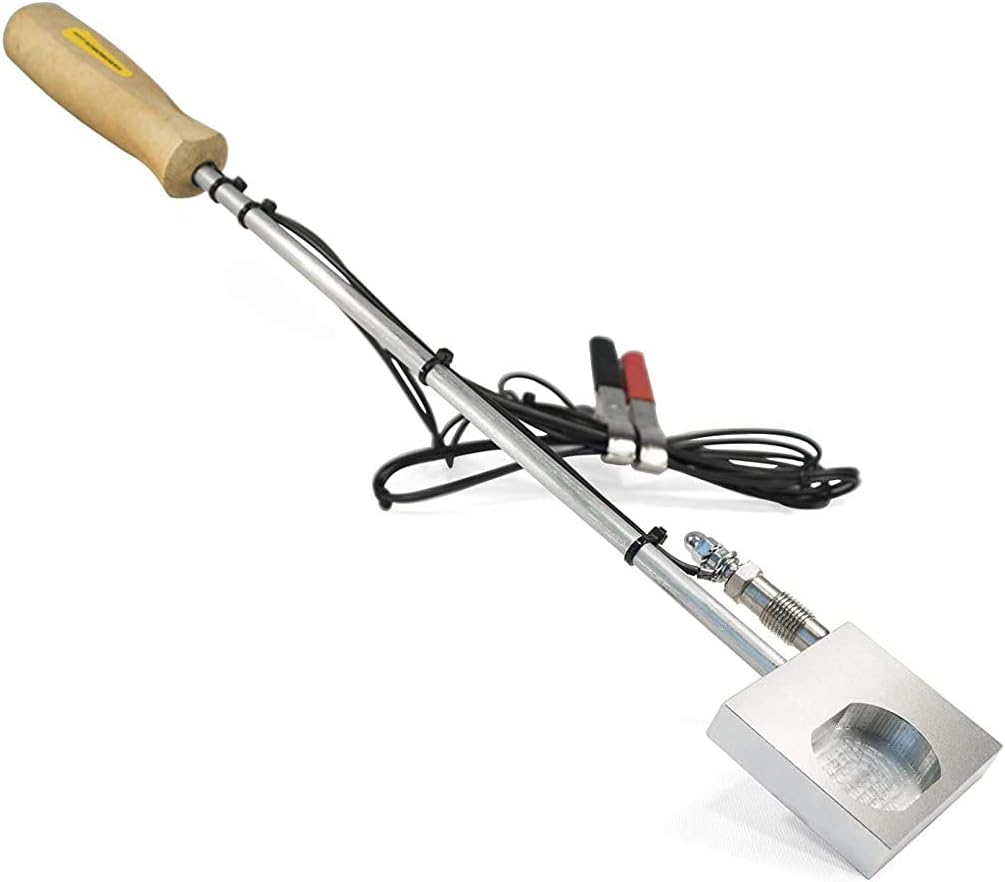 In this method, a solution of oxalic acid, with a bit of sugar is dribbled between the brood frames at a standard dose per frame covered. Technically, the bees are not supposed to be damaged too much by this, but I have seen some evidence to the contrary.

Oxalic acid is classified as a treatment for varroa mites, and as such, it is controlled and regulated by various laws. Because Oxalic acid is a toxic chemical these controls are quite rigorous and well thought out. Here is a link to the EPA material safety data sheet for Oxalic acid for varroa treatment.

Gloves such as these are quite useful. You must remember when working with bees that you are handling dangerous chemicals around animals with equipment that can puncture holes in protective gloves. In this regard, I have always found that bees seem to have more difficulty getting through nitrile chemical gloves than other compounds. I know that the regulations suggest a number of different glove types that are compliant – but in this regard, I would suggest the nitrile being the best.

It is imperative that honey supers be removed from the hive before treatment and that these remain off the hives for at least two weeks prior to being replaced. This is to allow the bees to achieve maximum exposure to the medication and to prevent contamination of the honey with oxalic acid.

Given that the dribble method actually involves providing the bees with a sugar solution containing oxalic acid, there is a very real likelihood that if they have storage space, that some of this could end up in the honey supers. This is undesirable given both the toxicity and flavor impact of oxalic acid on honey.

Why Do We Always Want To Achieve Maximum Doses Of Treatments?

When it comes to treating bees it is important to understand another aspect of oxalic acid and honey supers. We are administering a dose of a chemical to a hive in order to kill varroa mites. If we have a large space, which we would if we had honey supers, we run the risk of having a lower dose of oxalic acid in the area being treated. There comes a point when this dose may be enough to kill mites that are highly susceptible to oxalic acid, but it may leave the ones that are less susceptible.

If some mites survive treatment due to having some ability to tolerate oxalic acid, then these mites will bread and multiply, and subsequent treatments if they are also insufficient to kill all the mites will enrich further for oxalic acid-resistant mites. Within a short amount of time, these “under-treatments” can destroy the efficacy of oxalic acid. This is a pretty standard method by which many treatments have actually been rendered useless – people do not follow instructions, and the result is that the pest develops resistance to the treatment.

I hope this article has helped you understand more about oxalic acid and honey supers. This is a nasty chemical – and varroa is a nasty mite. Safe application, using common sense, personal protective gear, and removing all honey supers will prolong the amount of time we can use this treatment to help out bees. Please share if you enjoyed the article.

Oxalic acid is a toxic chemical and as such, all steps should be taken to avoid it being included in honey. This typically involves the removal of honey supers before treatment. It is consequently illegal as per regulation to expose honey to oxalic acid - and as a result it is safe to say that honey that has been illegally exposed to a controlled chemical is ruined.

The FDA has published tolerance levels for the amount of oxalic acid that may be present in honey.

Can you feed bees when treated with oxalic acid?

There are mixed reports on this - if you are feeding bees, you are encouraging them to put down stores - if you have removed the supers, there is always the risk that when you return these, bees may more some of this feed into the supers - and it could contain oxalic acid. Probably best to avoid heavy feeding.

How do you use oxalic acid for honey bees?

There are two main methods - using a vaporizer that produces an oxalic acid gas that permeates the hive, and using a sugar/oxalic acid/water solution. The sugar solution can either be dribbled between frames filled with bees - or it can be sprayed on swarms and packages of bees to clean out any mites that may have hitchhiked along with the swarm or package.

Can I use formic acid with honey supers on?

Yes. Formic acid is registered for use with hives with supers. I personally hate formic acid - it is a very scary chemical, but, if you use it correctly, it can be helpful in controlling varroa mites.