Why Would We Need A 2 Frame Mating Nuc

In all honesty, you really do not. There are better options for mating nucs that ensure the bees are happier and that your queens mate far more successfully. A two-frame nuc is a really bad idea because bees cannot maintain the temperature of the brood area. Bees insulate their brood combs by having pollen combs on each side of the brood nest. Pollen is a good insulator. The bees then pack the bee space in the area between these combs and around the brood comb so that the brood is kept at a constant temperature.

A mating nuc is that box in which we place a virgin queen/queen cell and some worker bees so that the queen can fly out on her mating flight and then return. Typically we wish to have a look in these nucs after a week or a bit more to see if the queen is laying, and what her brood pattern looks like. This allows us to see if the queen will get terminated or used. If you have a two-frame mating nuc, the brood is strongly impacted by the fact the bees cannot thermoregulate properly, and you cannot really perform proper quality control on your queens.

That said, I know of large operations that use two-frame mating nucs and manage to succeed! I also know people who enjoy driving stick-shift cars instead of automatics. I have a friend who collects steam trains too. Each to their own. But in life, if there is an easier way to do something, that works better, and is more efficient, it makes sense to think about that option first.

What Do We Mean When We Talk About A Mating Nuc?

A mating nuc is a small box of bees (nucleus as in a very small seed hive). When we produce large numbers of queens, we need them to hatch out in individual boxes. The reason for this is that if you have queens in one box, the first to hatch will just go and sting all the other queens to death. In this way, you end up with a heap of dead queens in front of your hive. If you farm the queen cells out into mating nucs a few days before they hatch, the queens emerge and they have a handful of workers to attend to them.

The queen will prepare for her mating flights. In these flights, she will go out to a drone congregation area and mate with a  lot of drones. Once she has done this, she will take a few days to start laying eggs depending on her genetics. If she is a healthy queen we will see that her laying pattern is neat, the eggs hatch and they develop into a healthy brood nest. This allows us to ascertain that she is properly mated and ready to be set off to a big hive to take over operations there.

If we find a queen makes a mess in a mating nuc, it is easy to terminate her and then we also do not end up messing up a big production hive with a bad queen. A mating nuc box that is small is, therefore, the best option to minimize risk and maximize success. Ideally, if the box is insulated and has a feeder in it, the success will be even greater.

I have a few High-density polyurethane foam boxes that I organized in the 1990s. These still work! I see there are now a lot of clones of these. Here is one and here is another. I actually think the ones I have are better, but these will work relatively well too.

There is little point in making a 2 frame mating nuc – it just works less effectively than the above boxes. Each person has their own method for using these things. I just put four of them above the brood box and let my bees draw the combs and put some brood into them and then remove the boxes and set them up as mating nucs. These little boxes have feeders in them (try putting a feeder in a 2 frame nuc without inviting robbing) and you can easily populate a box with a few hundred bees and a queen. They just work. These little boxes are light, and you can put them around in different places so that the queens don’t accidentally return to the wrong box.

Here are a few of my old Apidea mating nuc boxes that have been in use on and off for at least twenty years. You can see where I have glued lids back together, where rats have nibbled the boxes, and so on. They work. And they last.

Learn more about: How Long Can Bees Stay In A Nuc?

What Is The Difference Between A Mating Nuc Box and A Nuc Box?

A mating nuc box is really small – it is just enough of a box that there are a few workers to tend to the queen and for her to be able to lay a few eggs after mating so we can assess if she is functional. A nucleus box, or nuc, can be anywhere from three frames to 7 frames in size. I know there are people who make two-frame nucs but this is just silly. They don’t work. Three frame nucs are the smallest I will go – the bees use the middle frame to rear brood and a bit of each side frame. They are able to almost keep the temperature at the correct level in a three-frame nuc. Ideally, a nuc should be four or 5 frames. I love these nucs. 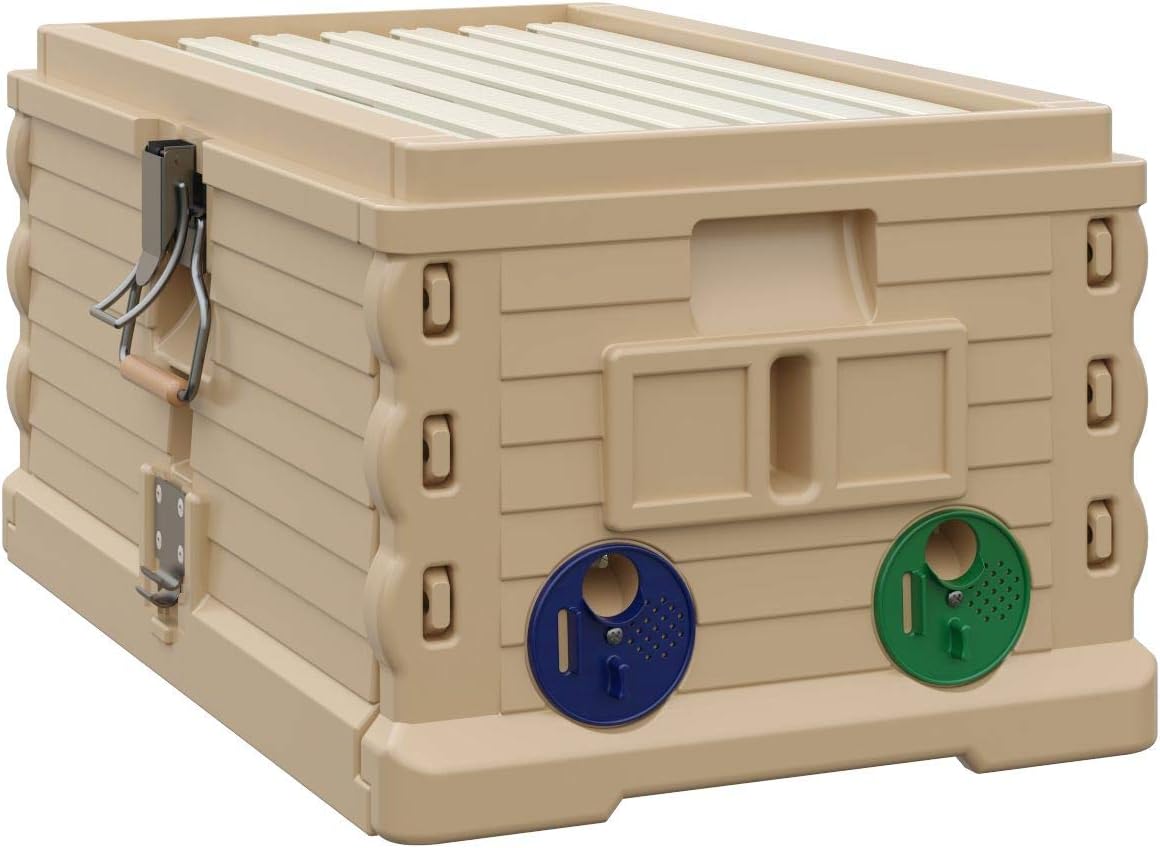 A seven-frame nuc is actually an ideal garden beehive much like a Warre hive is. You can put nuc supers on this, and just have a quiet little hive in a corner. They never get enough bees in them to be a real nuisance and can be remarkably productive in bad years. The nice thing with a seven-frame nuc is that it is a bit easier on the back when you need to move it. Those extra three frames of honey per box make a big difference to how much a hive weighs. If you want to have a strong healthy back for a long time – avoid lifting a lot of 10-frame deep supers. You only need to go to a few beekeeper’s meetings and watch the older beekeepers walking/shuffling around to know that deep supers mess your back up.

When You Buy A Nuc Does It Come With A Queen?

This will depend on what you organize with the person who makes the nuc for you. Some nucs can have a queen, some can be a split and you may or may not have a queen – the bees will make a queen. Some nucs will have a queen cell in them that will hatch a few days after you move the nuc to your place. There are many options. You need to specify when you buy the nuc what you want.

What Are The Disadvantages Of Purchasing A Nuc Over A Package?

A package comes with a mated queen of known provenance and a few pounds of workers. There is no brood and consequently, you have a reduction in brood-born diseases that you buy with your package of bees. The queen is mated in an area where we would assume the bee breeders have made sure the drone population is strong and there are enough drones to cover the queen properly.

When you buy a nuc you inherit all the diseases that were in the mother hive – these include varroa mites. If you buy a nuc that has a queen that will hatch, and you move it to a new area, you may find there are no, or few drones available, and you can end up with a poorly mated queen.

I hope this article has helped you understand the difference between a mating nuc and a nuc. I really really do not like two-frame nucs. Do not waste your time even trying to play with these. Rather use small queen mating nucs as described above. These work. 99% of commercial queens sold in the world are produced in similar boxes. If you enjoyed this article please share.


Read more about: How Many Bees Are In A Package?

What is a mating nuc?

This is a small box that we use to allow a queen to hatch and go on her mating flight and then lay a few eggs so we can assess if she is functional.

How do you use a queen mating nuc?

You need to get the combs in it drawn, insert a few workers and a queen cell. Ideally they should have a feeder.

Do nucs come with a queen?

This will depend on what you negotiate with the nuc supplier! Some nucs come as empty boxes! If you order a box with a queen, it should have a queen. If you get a nuc that is a split, it may or may not have a queen, and may rear a queen. Be careful to order a nuc with a queen if you are setting up bees in an area with no bees - you don't want a young queen to emerge and not be able to find drones to mate with.

What are the disadvantages of purchasing a nuc over a package?

Nucs bring brood diseases with them. A package has no brood, so the risk of transporting diseases is less. In this regard packages offer some advantages.