In the days of our ancestors, people would burn a piece of elephant dung (Africa/India/Asia) or some horse dung and branches in order to make smoke. They would blow this smoke into a beehive and the bees were calmed and honey was gathered.

Now, in modern times, we have the handheld bee smoker – some bellows and a firebox to make smoke. In this article, we look at how the smoker works. We explore what the ideal fuels are, why smoke calms bees, and how this helps us work with them.

How Does A Bee Smoker Work?

A bee smoker works by burning beekeeping smoker fuel to make a thick grey smoke that is not very hot. The smoke can be blown into the hive, and around the hive. A set of bellows attached to the smoker blows smoke out of the spout.

The firebox of a smoker has a grid at the base and a hole below that. A set of handheld bellows attached to the smoker blow air into the smoker, under the grid, and into the burning fuel placed on top.

The fuel is confined to the fuel box, hence it rapidly depletes oxygen and then smolders making thick white smoke. This smoke is not very hot, because the rate of combustion in the fuel box in the smoker is low.

Cold smoke is ideal because we don’t want to be blowing hot smoke on the bees and burning them to death. We have now explored how a bee smoker works. Lets have a look at what the smoke does to the bees. Learn more about: How Does A Bee Get Oxygen?

What Does Smoke Do To Bees?

If we look at a beehive you have honey which represents the stored wealth of the hive. They can use honey as a backup when energy source when it is too cold to collect nectar, or they can use it during dry periods when there is no nectar. The hive has its working capital – dilute nectar that the bees eat and use for energy in the hive, and then pollen and brood.

Bees normally keep just enough nectar in their honey stomach for them to have the energy to do what they have to do. Unlike us, bees cannot get fat because their exoskeleton cannot expand hence they do not overeat. In fact, if bees do eat too much sugar they make wax, but that is a different story.

If a bee needs to defend the hive and sting something it will die. This means that the honey in its honey stomach will be lost to the hive. To bees honey is money – it is concentrated energy, so a dead bee with a full stomach is a lot of wasted honey.

Guards and defensive bees are hence kept on quite empty stomachs – the means they can bend their abdomen and really jab that sting into you.

Bees communicate important messages with pheromones. These are chemicals that other bees smell and then react to. Anger pheromone or alarm pheromone alerts the bees to a problem. If a beehive is getting angry, the amount of alarm/anger pheromone in the air in the hive increases and the bees get defensive.

You will know if things are getting out of hand – you smell a banana smell – this is alarm pheromone. Time to smoke the bees a lot.

When bees smell smoke, they instinctively go and fill their honey stomachs with nectar or honey. This is because they think the hive is about to burn down, and they fill up on “fuel” so they can escape a fire in an emergency swarm.

A bee with a full honey stomach views itself as being more “valuable” than other bees. Hence if it smells alarm pheromone, it will rather leave “defence” to another bee that has less honey. There is also little point in defending a burning hive.

Smoke dulls their communication lines, hence in addition to bees having full stomachs and feeling less angry, they now cannot smell the pheromones as well.

The overall effect is that smoke disarms the defensive tendencies of the hive.

There are countless theories about this and each beekeeper has their own beliefs.

I personally like to just get old brown cardboard. If it is plastic-free, cut it to the length I need for the smoker fire box, and roll it up. Then I tie the roll-off with a piece of hessian string. I keep a box of these in the pickup truck.

To light it I use a small portable propane torch, then once the roll is lit at the bottom, I drop it in the smoker and puff it a few times until flames jump out of the lid. It makes a sort of woof woof thump sound as the flames catch alight. Then you drop the lid and you have nice white smoke capable of calming the craziest of killer bees.

Some beekeepers like to use pine needles, wood chips, commercial fuel pellets and a range of other things. Play around and find what works for you. 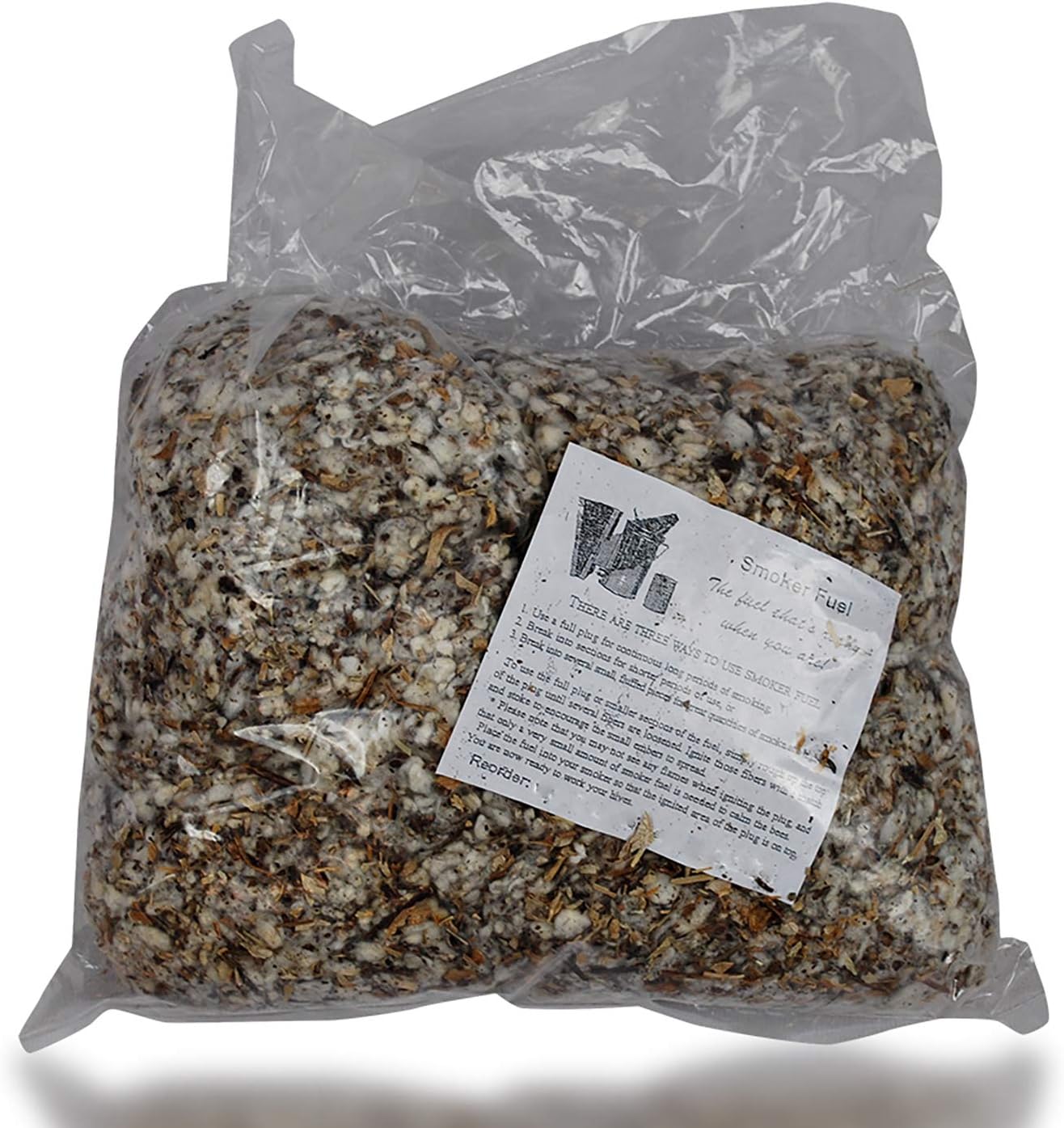 A good fuel should burn for a long time – there is nothing worse than bees getting angry and your smoker has gone out. This is how disasters happen. The fuel should be cheap, and it should not leave any smell on the honey.

I personally find wood chips and elephant/cow/buffalo dung seems to leave a bit of a smoky note on your honey. Natural cardboard smoke on the other hand leaves less residue.

It is very important not to use any beekeeping smoker fuel which has plastics or chemical waxes in it. I once saw a guy who used firefighters to start his smoker, and these things had parrafin in them. The honey smelt like it had diesel fuel in it afterwards and was definitely damaged and toxic.

Not only will these smokes damage the honey, I have no idea what the smoke will do to the bees. It is important to use natural beekeeping smoker fuel.

We hope this has helped you understand how a bee smoker works. If you found this interesting, please pass it on to friends. And remember – a bee smoker can also be used at parties if you were to happen to put certain recently legalised herbs in it.

Read more about: How Long Do Beehives Last?