There are times when we need to place a queen in a cage – this naturally places her under stress. Every extra day in a cage causes damage to the queen, hence people often ask how long can a queen bee live in a cage? Let us explore why we cage queens, what can happen, and how this can affect the efficacy of the queen.

Why Do We Cage A Queen?

There are a number of reasons why people may put a queen bee in a cage. Here are a few good ones and one bad one.

Introducing A New Queen To A Hive

When introducing a new queen, we have to allow the workers in the new hive to become accustomed to her. If you just drop a queen in a hive she will normally be killed by the workers in that hive as they detect that she is “not from the hive”. If you put her in a cage and place some candy in the release hole in the queen cage, the workers will spend a lot of time trying to touch her and get covered in her scent through the mesh of the cage. By the time she gets released from the cage, she will be accepted as part of that hive.

In terms of the question of “How long can a queen bee live in a cage?” in this case, we want to get the queens into their new hives and accepted into the hives as soon as possible. A queen in a cage cannot lay eggs – eggs are future bees – bees make honey, so time is honey. 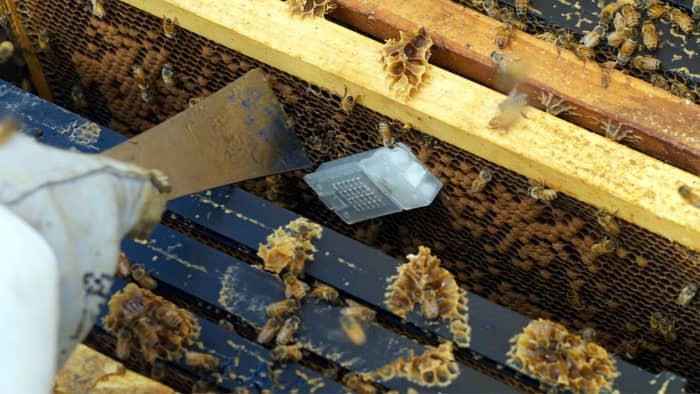 Read more about: Why Do Bees Kill Their Queen?

Storing A Queen For A Few Days

Banking queens is a method where you place a whole lot of queens in cages and place these in a hive. The workers can feed the queens through the mesh, but cannot kill them.

This used to be quite a popular practice but mounting evidence suggests that the banking of queens causes long-term damage to the ability of a queen to function in a hive. This is caused by pheromonal interference. How long can a queen bee live in a cage with other caged queens nearby? I would never want to do this actually. Better to avoid queen banking. Plan your queen schedule to avoid this damaging practice. There is always some creative clown who decides they want to smuggle bees. People get insanely fascinated with bees and the variety of different types of bees around the world. Collectors are strange people. I remember once meeting a guy who was visiting every country in Africa, buying a few queen bees and taking them back to Germany where he had an “apiary collection” of the bees of Africa. The risks that this selfish behavior poses to the indigenous bees of Germany are huge.

Can Queen Bees Survive In A Cage On Their Own For Long?

No. Queen bees are nutritionally demanding creatures -they have to be fed a lot of food by their attendant retinue of worker bees. If a queen is not surrounded by bees who can feed her she will become weak very fast and will actually incur long-term damage. A queen who has been subjected to a day of starvation will never perform as well as a well-cared-for queen bee will.

How Do Queens Get Out Of Their Cages In A Hive?

Typically a queen cage has a small plug on one end. We fill this plug with some sort of candy that the bees can chew through with time. I used to just buy a type of toffee that worked well. Some people use a mix of sugar and honey. Some use sugar and water. The main idea is that you want a candy mix that takes a few days for the bees to chew through. It needs to be difficult to remove, but not so difficult to remove that they do not remove it. I once had a queen die because the bees just propolised the release hole!!

This is an interesting thing we can do with a beehive. There are ways that we can configure a hive such that it contains multiple queens. This also happens sometimes in nature. I will elaborate on that in a bit.

Queen bees will seek to destroy each other in a hive. However, if we employ some creativity, we can keep them apart, and create a hive where multiple queens can coexist in one hive. If you take a conventional double brood box hive and then place a queen excluder above this, and a shallow super above that, the bees will fill the brood box with brood and the super with honey.

If you place a queen excluder over the super and another brood box above that, you can move some brood from the lower brood box to the top. If you introduce a queen in this second brood box you can then let her emerge and take over that brood box. You now have a dual queen hive.

I knew a chap who took this to a new level. He put three double brood boxes next to each other on the ground. He then made spacer boards and put two supers so they straddled the three hives. He then placed queen excluders and put two brood boxes with new queens on them. This made a 5 queen hive. He then did this again on top of that and reduced the system to a single super and brood box straddling the two hives, and introduced a queen, making it a 6 queen hive. The whole thing was a crazy steamy mess of foul-tempered angry bees. It produced a bit of honey but was basically an unworkable system that was just done for the sake of doing it. I think he wanted to try and create a half-a-million bee beehive.

Wild bees often choose nesting sites that are quite close to other beehives. I remember a bee removal I did when I was 19. There was a garden shed with “Some bees” in it. I opened the door and an entire wall was covered in bees. The “beehive” was actually two hives that had joined in the middle. It had two brood nests separated by a lot of honey!

I hope this has helped you understand how long can a queen bee live in a cage. Queens are sensitive demanding creatures – the more we let them do what they do best – lay eggs – the better! Storing queens for any duration of time damages them – release them as soon as you can. If you enjoyed this please share.

How long does it take for a queen to be released from her cage?

Ideally it should take about two to three days. This gives the workers enough time to get used to her so that they don't kill her when she gets out.

Can a queen bee survive alone?

They can survive for a few hours. Queens need constant attention and feeding from their attendant workers.

Why are queen bees caged?

Normally to allow them to be stored for transport and introduced into new hives. You need a queen to be introduced slowly into a hive so that the workers get used to her before she escapes the cage. If you just drop a queen in a hive the workers kill he instantly.

Is it possible to have 2 queen bees?

It is possible to have two queen bees in a hive. You need to keep them apart, using queen exluders, and preferable a super of honey. Then the bees will amalgamate into a multiqueen hive.