Why Do Hives Die?

There are many reasons a hive may die. Diseases, starvation, poison, over predation by insects, a lack of water, and extreme temperature are the main causes of hive death. Bears and other hive predators are also a source of hive death, but that is not a topic for this article. When a bear or a baboon or honey badger or rogue human has raided your hive the source of hive death is clear, and there will be very little left of the hive.

There are two main types of poisons that can cause a hive to die. You get pesticides applied to flowers that contaminate the nectar and pollen. These can sometimes be returned to the hive, and the bees in the hive consume these poisons. It is relatively easy to tell such a poisoning as there will normally be a lot of dead bees in front of the hive.

The death of the bees is shortly after the bees are exposed to the poison. You will see bees hopping around and being a bit pathetic in front of the hive. Every now and then a bee will fizz out of the hive, like popcorn out of a pot, and crash into the ground and buzz.

The second type of poisoning and this is the worst type, – is microencapsulated poison (we covered this issue a bit more here). These poisons are designed to have a long-lasting effect when applied to crops. The poisons are encapsulated in a polymeric substance. The bees can store this poison, and will then consume it and die later. I have had hives die from these in the middle of winter.

When this happens you will find a layer of dead bees on the bottom of the hive. There will often still be honey in the hive. You can differentiate between a hive that froze and a hive that got poisoned. A poisoned hive will tend to have signs that the bees were acting uncharacteristically – there will be dead bees all over the hive and the bottom board. When a hive freezes, the bees will just huddle in the cluster and slowly die – the cluster will be largely intact.

What To Do With A Hive That Has Been Poisoned:

Condemn all the combs in the hive – I cut the combs out and burn them. Some people will just dispose of the combs in the waste. I feel it is better to burn them because even if the bees are dead, hive beetles can tolerate much higher levels of poison and will multiply in the combs.

I have had people ask me what to do with honey from a dead hive that has been poisoned – it is not worth taking the risk of consuming this. Poisons are just nasty chemicals – even if you eat the honey and are fine, you do risk giving yourself long-term problems such as certain cancers and so on. When it comes to working out what to do with a dead beehive that was poisoned it is simple – condemn and dispose of honey from contaminated hives.

What to do with a dead beehive that died from America Foul brood? If your hive has succumbed to American Foulbrood, your local extension officers will confirm the identification. Typically destruction of the hive is advised. Consumption of honey from contaminated hives is not advisable and all of the hives should be quarantined and dealt with as per local laws.

This pest produces long-lasting spores that can reinfect other hives. These hives will then also need to be destroyed.

This is a less problematic bacterial infection than AFB  as there are no spores involved. It requires treatment and your local extension officer can provide advice on how to deal with European Foul Brood.

If you have honey from hives infected with this pest, you can make mead from it! The alcoholic fermentation process will kill any bacteria with time. We will have a look at this at the end.

You can use the honey from this hive. Clean the hive up, air it for a few days and you can reuse it. If there is any dead brood feed it to chickens or dispose of it. The varroa mite can survive a few days inside brood cells and then dies.

What to do with a dead beehive that was killed by small hive beetles? When small hive beetles cause a hive to collapse the honey gets a really unpleasant stink to it. I have yet to find something you can do with this honey other than fermenting it to make spirits for distilling into honey vodka. It makes bad mead, but if you distill the mead, the honey spirit is actually very nice. More on that later.

The Bees Froze Or Suffocated

When we look at what to do with a dead beehive that froze or suffocated it is quite simple. Open the hive up – the cluster will be largely intact but dead. Shake the dead bees into a bucket. If you are in an area where cannabis cultivation is legal, give the dead bees to your grower friend. There is something magical in honeybee carcasses that makes said plants grow very well.

The honey can be used for whatever purposes you wish. It will be safe and fine. If the combs have sugar water honey in them, give these combs to other hives to give them a little boost.

Can I Put New Bees In An Old Hive?

If the hive was poisoned, you can use the box, but not the combs. Place new combs in the box and the bees will be ok. If the hive had AFB you probably burnt it – so the answer there is no. For all the other causes of death, clean the hive and reuse it. It will not hurt to soak the hive in bleach as well – this kills pathogens.

When figuring out what to do with a dead beehive we always try to minimize the risk to new bees. Otherwise, we start back at square one a while later with another dead beehive.

Fermenting Honey To Process It Into Other Products

Fermented honey is called mead. When asking ourselves what to do with a dead beehive, making mead is an excellent choice if the honey is not poisoned. You can make excellent mead from honey with defects that make it less pleasant to eat as straight honey.

If you mix 40% by weight honeycomb and 60% by weight water (rainwater or chlorine-free is best) and place this in a bucket it will ferment naturally from the wild yeast in the honey. As an example, 4 pounds of honey and 6 pounds of water would follow the ratio suggested.

You can leave the combs in the mixture too. Place a lid on the bucket – not tightly – just enough that it can stop insects getting in the bucket, but loosely enough that gas can escape. Forget about the bucket for a year. When you next open it you will have sherry mead. You can decant it into smaller bottles and store it. This product will store for centuries if you place it in a screw cap bottle. Ideally, consume before that as we tend not to live that long – yet. The above shows the first bucket, with whole comb mead being made – the second is a 7-year old bottle of sherry style whole comb mead. The flavor is amazing. I typically try to drink it after aging for a few years.

Mix your honey and water. Adjust the density (weight per unit volume) using a hydrometer. Target a Specific Gravity of about 1.100 to 1.110 and use a powerful distillers yeast such as Turbo yeast. Place in a warm spot and the fermentation will be complete in a week or so – this will be evidenced by the hydrometer sinking to an SG of 1.004- 0,995. Bubbles stop.

You can distill this with a number of different options. This is an off-the-shelf kit. Mead spirits, honey vodka, medowitza, mazey, or whatever you decide to call it is an incredible spirit. I particularly enjoy using a bit of mead spirit to make honey liqueurs. 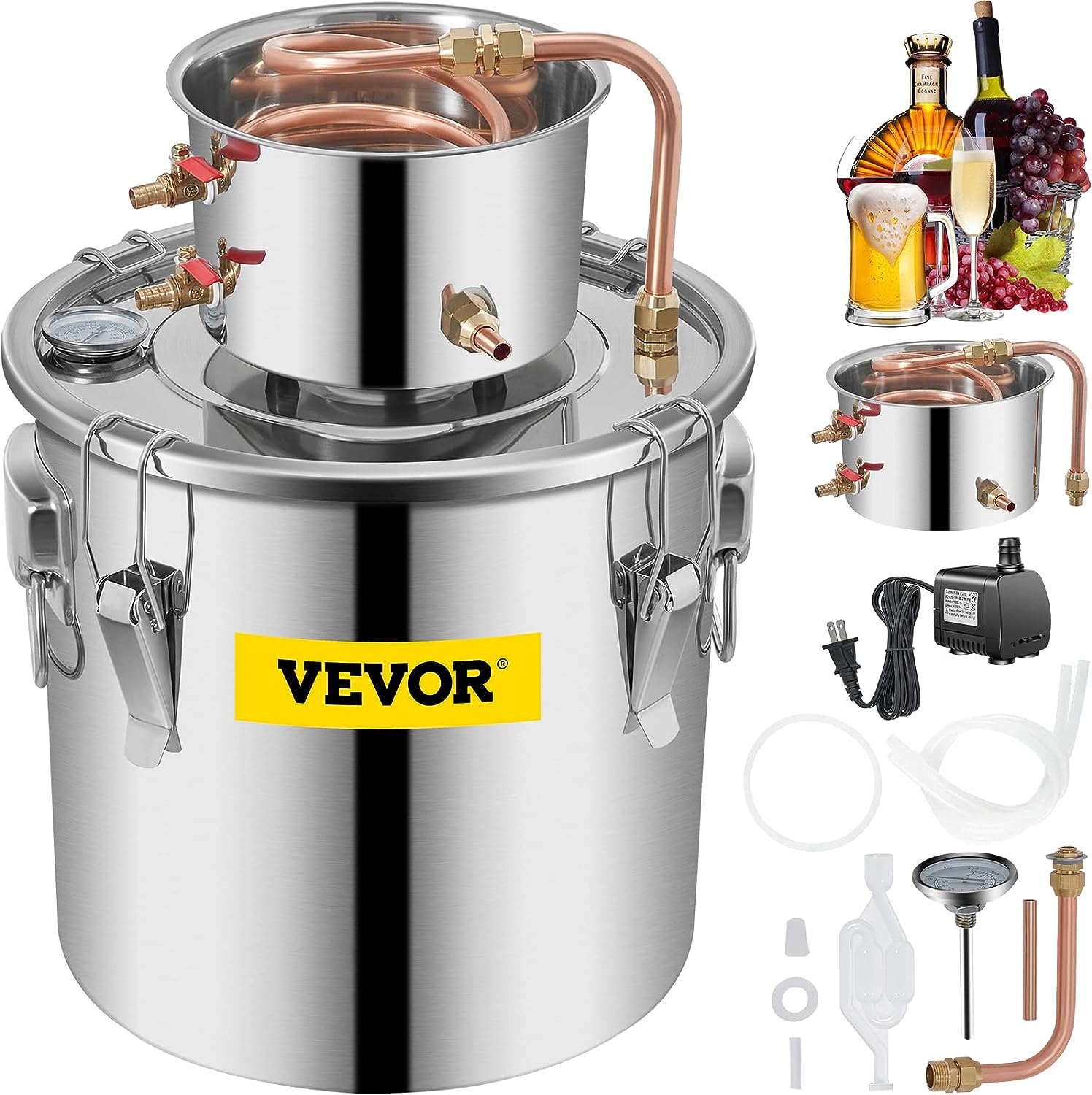 When small hive beetles destroy a hive, the honey gets a horrible sweet-sour taste. It is inedible. However, oddly enough if you use honey from a small hive beetle incident to ferment and make mead to distill, the distilled product is amazing. The sour fermentation gives you a slight bourbon quality (sour mash) with some volatile organic acid sweetness. Quite remarkable actually. This is literally the only good thing that comes out of hive beetles.

This is a bottle of mead spirit from a small hive beetle-infested super of honey. The honey was sour and disgusting – but fermented and distilled it produced an amazing spirit. Aged on a bit of American Bourbon barrel oak for color.

I hope this article has helped you understand what to do with a dead beehive and how to clean out a dead beehive. Knowing what to do with honey from a dead hive is important and now you can decide whether you need to destroy the honey, eat it or make mead!! And of course, if the hive is cleaned up the right way you can put new bees in an old hive. If you found this helpful please share.

Read more about: Do Bees Know They Die When They Sting?

can you eat honey from a dead hive?

If you run the diagnostic in this article you can work out if you can use the honey and how to use it.

Can I put new bees in an old hive?

Follow the diagnostic in this article to work out if you can use the dead hive to house new bees or not.

What To Do With A Dead Beehive?